As I plan our vacations, (we’re planning one for Peru right now), once we’ve figured out where we’re going, pick a hotel and book a flight, I usually spend a lot of time choosing restaurants. I love good food and happily return to favorite restaurants and dishes. But, I also like trying new things. On a recent trip to Spain, we ate at our first Michelin three star restaurant, Akalerre, in San Sebastian. Not only was the food great, but it was an

exceptional dining experience – impeccable service, beautiful, imaginative plating and a killer view. I know I’m not going to find Michelin starred restaurants at Disney theme parks. But, as an admitted foodie, I still spend considerable hours planning and picking restaurants for our Disney trips. So how does a foodie like me navigate the good, bad and pedestrian at the Disney theme parks? Before I answer, I’d like to offer some Walt Disney context.

Most theme parks before Walt built Disneyland (and still today) offered spartan, self-serve, cafeteria style food locations, with carnival style food – hot dogs, hamburgers, popcorn, soda and ice cream. I consider this food as fuel, not the pleasurable experience I hope to have when I eat. Those of us who like thrill rides, hold our noses, stand in line and eat purely for energy. Other theme parks like Hershey Park and Busch Gardens Virginia, which I visit now and then to get my roller coaster fix, are beautiful. But, food choices are about convenience and suffering through the best of the worst.

Walt knew that to keep people in Disneyland, and to make maximize his profit, he would have to offer food, snacks and other refreshments. That was just good business. But, that wasn’t enough for Mr. Disney. He extended the same approach he took to attractions and the overall design and beauty of the park to restaurants and snack bars by integrating the eateries into the overall theming of the Land they were in. During the early years, you could go to the Tahitian Terrace in Adventurland or Casa de Fritos in Frontierland. And because he was the first to bring sponsors into a theme park, he managed to present unique food and snack offerings. Early restaurants included Aunt Jemima’s Kitchen (pancakes at a theme park?, check), Welch’s Grape Juice Bar and Sunkist Citrus House (that’s what passed for a healthier choice than soda back then). Take a look at this post from the Disney Food Blog for a more detailed look at early Disneyland restaurants and menus. 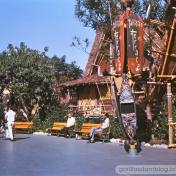 As someone who places a lot of importance on food during my vacations, how do I manage in an environment designed to deliver quantity (more than 1.6 million turkey legs are sold each year at Disney World) not necessarily quality? First of all, before you all start screaming at your screens, there is very high quality, inventive food to be found at Walt Disney World. Victoria and Alberts, Jiko and Narcoossees are examples of wonderful places to dine and deserve the high praise they receive, from critics as well as guests. They are also very expensive and should be treated as experiences that should savored and given the time necessarily accorded any fine restaurant. At some point, I hope to visit them all. The Disney theme parks do offer a wide variety of menus and price ranges.

Most of my reservations are for dinners, with the occasional lunch or breakfast, depending on what we have planned for the day. Breakfast is usually eaten at the hotel’s quick service restaurant like The Mara at Animal Kingdom Lodge, Capt. Cook’s at the Polynesian, or a food court, if there is one. Lunch is planned around the park we will be in, or back at the hotel if we are taking a break.

Where then, do I spend my hard earned dollars on food WDW? While quality of food is very important, I tend to gravitate to restaurants that also offer good atmosphere and

great theming. Since I live very close to NY City, there really isn’t any kind of food that I can’t eat, almost whenever I want. I can find a good hamburger in many places. But Hollywood Studios is the only place I can eat a good one, sitting in a “car” at The Sci-Fi Drive-In. I can eat a pork or lamb chop in many restaurants, but only at Be Our Guest, can I dine in the Beast’s castle.

I do accept lesser quality and, even, pay a premium for a Disney style experience. Good examples of this are San Angel Inn. At best, the food no better than a chain Mexican restaurant. But entering through the marketplace courtyard sets the scene for the

restaurant in the same way Main St. USA prepares us for the rest of the Magic Kingdom. That’s pure Walt Disney design. I love the illusion of eating outside, inside, with the stars overhead and the mesmerizing Aztec temple scenery and active volcano. And, while waiting for a table we can take a ride on the delightful Gran Fiesta Tour.

Similarly, I will put up the so-so food, the unnecessary check in line (we all have a reservation) and rushed service at the Hoop De Doo revue. The many large tables to service and they need to get everyone served so the show can start on time makes it tough to provide good service. However, I find the showing funny and charming and, happily, go back again and again.

There’s not much in the Magic Kingdom that I rush to visit. If I’m looking for a fast lunch or late dinner, I’ll go to Columbia Harbour House where you can get some unique offerings like a lobster roll or Hummus. And, although it offers very limited seating, Casey’s Corner has great Hot Dog choices, if that’s what you’re craving.

In Animal Kingdom, the only restaurant I’ve returned to is Flame Tree Barbecue. The BBQ is so-so. But the seating has great views of the water and Expedition Everest.

(Unfortunately, you can no longer sit here and eat a smoked turkey leg. A shame, since you have to eat it on the move everywhere else in WDW).  It’s hard for me to leave without a colossal cinnamon roll from Kusafiri Coffee Shop & Bakery, which I usually take to go and eat later. 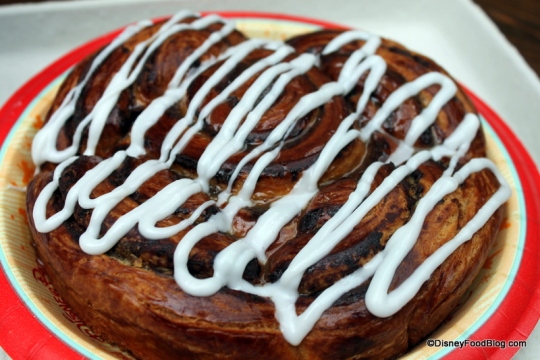 I’ve already mentioned Sci-Fi Dine-In, which is a family favorite. My other favorite at the Studios is the Brown Derby. I love the golden age of Hollywood vibe which fits the general theme of the park. The recreation of the former Hollywood landmark is like going back in time. The service is first rate and, overall, I’ve found the food to be consistently very good. We’ve had some memorable meals at the Derby, including one with my 88 year old father on his first trip to WDW . He told some great stories from his youth about brushes with organized crime, his family’s deli being robbed robbed twice by the same guy and how pinball in the back room was played for money in the 1930’s.

The Kramer family at the Brown Derby 2015

But, I digress. In addition to San Angel, there’s another restaurant, big on theming and smaller on food –Biergarten Restaurant. Once again, the outside, inside feel of being in a German mountain village is magical and you can’t beat the show with your meal. But,

the food, meh. It’s ok if you like meat and potatoes and mediocre ballpark food. And, other than strudel, what’s with those other desserts. Not exactly like being in Germany. On the brighter side of Epcot food , there’s Restaurant Marrakesh with its raucous
atmosphere, belly dancer and a menu of interesting choices.

Moving up the quality food chain, Coral Reef serves up very good seafood and a killer view of that amazing undersea world.

Many of our favorite meals are in the resorts. Anything in Animal Kingdom Lodge gets a slot in our meal lineup. Combine a beautiful resort, with African animals, a great buffet with unusual and well prepared choices at Boma or the very African menu at Jiko and you’re in for a wonderful meal. At the Grand Floridian, we like the bright surroundings and straight forward food at The Grand Floridian Café. The Polynesian attracts us, if we’re not already staying there, for breakfast at Kona Café and the crazy atmosphere and inventive drinks at Trader Sam’s Grotto cocktails and a relaxed meal. Finally, the food and service are top notch at Artist Point at the Wilderness Lodge.

I hope this has been an interesting, thought provoking, albeit very quick tour of some of our favorite food stops in Walt Disney World. Food means different things to people when they are at the WDW Resort complex. For some, it’s quick service fuel to get through the long days. For others, it’s about the characters. For me it’s about good food in interesting surroundings. I, for one, am glad that the Disney people have continued Walt’s fun and integration of food with the environment. In my mind, that’s what sets the Disney theme parks ahead of the rest and the reason I’ll keep going back for seconds.

The Unfulfilled Promise of E.P.C.O.T.

Comments on: "A Foodie Travels in Walt Disney World" (2)

This site uses Akismet to reduce spam. Learn how your comment data is processed.