According to the LA Times, there will be about 60,000 people attending the D23 Expo this year. It’s anybody’s guess how many tickets were sold for this years event at the Anaheim Convention Center. I’m happy to say, for the second time, I will be one of the thousands. You may have heard or read about waiting on lines, the crowds and that it’s impossible to get all the sessions you’d like to attend. I can’t speak for the other 59,999 Disney addicted souls, but I would rather accentuate the positive.

For me, the Expo represents an amazing gathering of people who can’t get enough Disney. Strange as it may seem, with all of the thousands of Disney fans who might live in or around where I live, I have found it difficult to connect with fellow Disneyites. I recently found a group of people who love all things Disney as much as I do. But for years, the only time I could surround myself with Disney fans, without making a spectacle of myself, was to go to a Disney movie. (See my post What’s with you and the Disney Thing? for some thoughts on my connection to Disney) The D23 Expo offers people like me an amazing opportunity to let the Disney Company do something for me as a fan, make me feel important and be surrounded by like minded people. 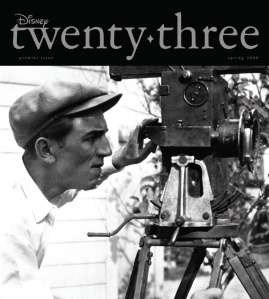 Over the years, Disney has done small things to acknowledge their fans, who, by the way, give them the funds to keep creating. Magazines, the old Magic Kingdom Club and probably some other things I’ve forgotten or didn’t know about. I don’t live near either of the 2 U.S. theme parks or the Disney Studios, so attending special events like premiere’s, screenings or tours is very difficult. I was always looking for something more. Maybe even a thank you for the money I have spent and the time I have loyally and happily invested in Disney related movies, trips and merchandise over the years. So, when Bob Iger announced the D23 fan club in 2009 I signed up. If nothing else, at least I’d get a magazine for my membership money. As I expected, early on, the events were mostly in and around Anaheim. But, the quarterly magazine has consistently exceeded my expectations. The articles are interesting and varied, the pictures are excellent the overall feel of the publication is very classy. And they always include a little keepsake surprise with the issues. So, I kept renewing. I’m glad I did.

Fast forward to 2012 when the Disney Archives announced the “FANniversary”  celebration, with NYC as one of the cities they would visit. I grabbed my tickets, hoped for something more than marketing for the

latest Disney films and tried to manage my expectations. The event exceeded those expectations. Not only was the event well organized, but there were keepsakes for everyone and the presentations by the Disney Archivists were interesting, full of surprises and included pictures and video that I had not seen before, covering movies, television, theme parks and more, all related to Disney Celebrations. I left the theater feeling more than satisfied with my annual membership.

The FANniversary was followed by an anniversary screening of Peter Pan on the big screen in NYC. Then in 2014 there was a second FANniversary tour. This time it celebrated many Disney anniversaries, including:

This time the event was held in a much larger theater, which speaks to the popularity of the event, and included a photo opportunity to see and stand near two pieces of Disney History. I can’t find my photos, but they were Mary Poppins’ hat and a Duckster statuette. 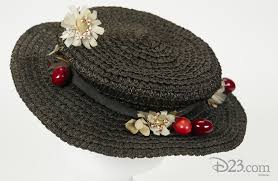 Once again, a lot of care was taken in organizing the afternoon and a good time was had by all who attended.  Now we’ve moved onto 2015 and I’m really starting to feel the love from Disney. So, I put some nickels, dimes and hundred dollar bills together (remember I live near NYC) and bought a ticket to my first D23 Expo.  As I get on the plane to LAX, I’m alternately excited and terrified. I had been reading some stories about camping out, long lines, and some attendees turned away from sessions that had filled up. This was a picture of the convention center the day before the Expo began.

The size of the signs correctly foreshadowed the size and scope of the convention. But, that day it looked peaceful.

I’m having difficulty remembering, but I think I arrived at the convention center the next morning at around 7am. My first impression was that things were a little disorganized as far as where to go, and the lines to check in were ridiculously long. After several hours in the heat, I was inside and found my way to another line to wait for the Legends presentation. 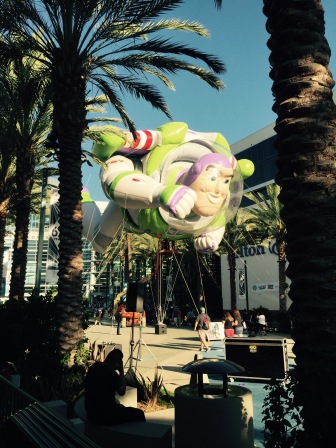 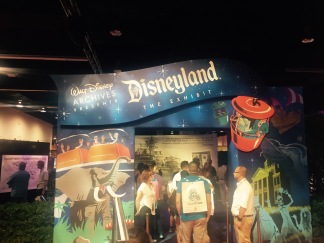 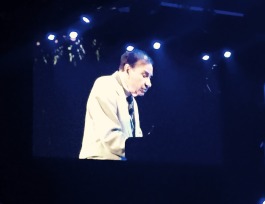 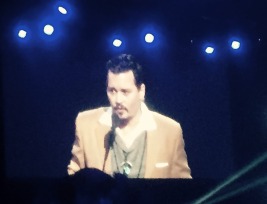 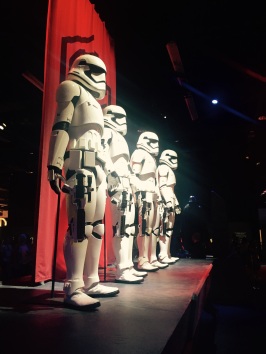 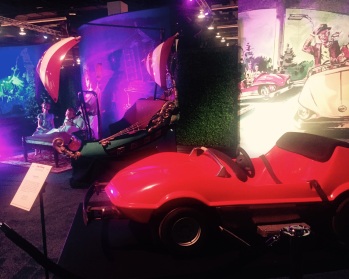 Yes, I waited on some lines, but I never felt like it wasn’t worth it in the end. No, I did not get to every session I wanted to, but I’ve never been to any conference or convention, for business or pleasure, where I was able to accomplish that. Yes, there was a lot of walking, but that made up for not getting in my usual exercise time. No. I didn’t get very much of the special Expo merchandise, but I that wasn’t why I attended. Yes, I was tired, but I will still take advantage of the discounted Disneyland tickets again this year.

Last year, I was able to attend the 25th anniversary showing of Beauty and the Beast at  Lincoln Center. Not only did we get to see the movie on a big screen, but there was a panel discussion with Angela Lansbury, Paige O’Hara, Robby Benson, Richard White and producer Don Hahn. We were treated to a mini concert by Alan Menken and then cane a complete surprised. Ms. Lansbury came out and sang Beauty and the Beast accompanied by Mr. Menken. 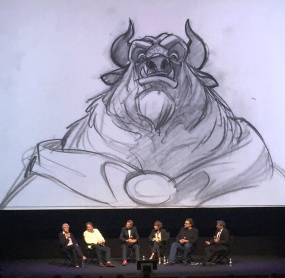 This year I had the unique opportunity to attend a D23 Gold member event in NYC, which celebrated the 20th anniversary of Disney re-opening the historic Amsterdam Theater in NYC. You can read the full account of this amazing day in my post Report on D23’s “Behind the Scenes” NYC Event. 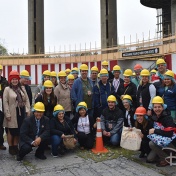 So, here we are, less than a week away from Expo 2017. Certainly, knowledge is power, I’m less nervous about what to expect. But, since it seems that Disney is always tinkering with things, I expect that there will be differences in how things work this year. Again, I’m managing my expectations for what sessions I would like to attend. Now that the full schedule is out, there are many things I’d like to see and experience. Many of them overlap or happen at the same time.

I hope that my second Expo is as fun and fulfilling as the first. I will try to attend some of the large sessions for Parks and movies and some of the reunion/celebration sessions for Lion King, Zorro and Hercules. I also would like to get to the sessions celebrating some of the Disney magic makers from the past like the Ink and Paint women, Disney product legacy, and the virtual visit to Hyperion Studio.

I hope all of you that have taken advantage of D23 are enjoying your membership as much as I am. I’m sure I’m not alone in thinking that it would be nice if the profitable Disney organization would not charge extra for tickets to all these events. But, I do understand that everything costs money. And I wouldn’t want them to skimp on the quality of the events. Even though many activities take place in Anaheim, the Disney Company is making a real effort to reach out to fans in many ways. Certainly, mounting an event as ambitious as the Expo every two years involves hundreds of people and very complicated logistics. If they were to ask me, I would encourage them to do more in the future and keep me and the rest of my Disney fan community feeling appreciated.